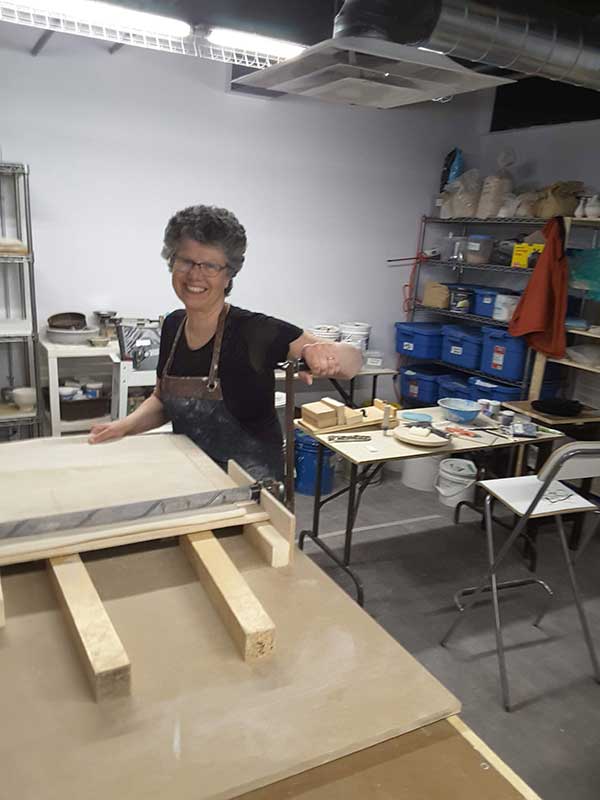 Ada Brzeski started pottery about 15 years ago under the tutelage of Anne Chambers. Mainly self-taught, Ada’s passion for clay led her to join the Ottawa Guild of Potters. She became involved in the organization as event coordinator and treasurer. She attended intensive pottery courses including ones at Haliburton School of Arts, Lunenburg School of Arts (with Walter Ostrom), Alfred University (with Bruce Cochrane) and La Meridiana in Tuscany.

Much of her work is inspired by her Polish roots and the colourful folkloric art works of that culture. She taught herself the art of Wycinanki [Vee-chee-nan-kee], the colourful art of Polish paper cutting. She studied in Poland under Maria Stachnal, one of the greatest folk artists there.

She shares a studio with three other artists at Studio Space Ottawa, of which she is a founding member.

Her work is available at the Wilno Craft Gallery in Wilno, Ontario. She also sells through the Ottawa Guild of Potters’ biannual sales. Pieces may also be purchased by contacting her directly. Ada.Brzeski@gmail.com

The Madawaska Valley Studio Tour began in the mid-1990s and was among the first established in Ontario. It has since grown to include two annual tours and ranges from Combermere in the west to Eganville in the east. Over 30 craft and fine artists are featured.

Are you a local artist?

This project was proudly funded through the Province of Ontario.